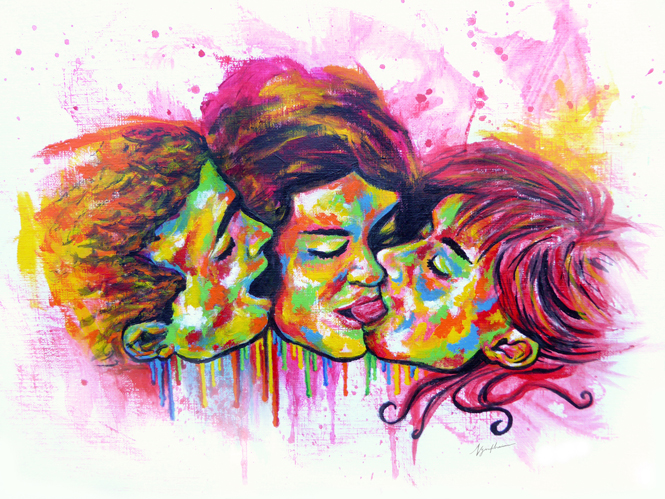 “I’m inside my head,” Murphy (Karl Glusman), a humorless young man in lust, says at one point in “Love,” French provocateur Gaspar Noé‘s sexually-explicit drama about romance and, well, being inside your head. “Love” unsentimentally depicts Murphy’s affair with Electra (Aomi Muyock) as a series of flashbacks, showing us all the information we need through the lens of Murphy’s present-day emotions. But because Noé wants viewers to see Murphy’s memories as a womb-like retreat, the first thing that impresses viewers about present-day Murphy is his petulance, expressed immediately through Glusman’s flat, affect-less voiceover narration voice. Murphy may be concerned with his romantic feelings for Electra, but he’s also a brat who blames his wife Omi (Klara Kristin) for his loveless marriage. “Love” is accordingly a prickly consideration of a past-tense sexual relationship from the perspective of a present-tense relationship that’s well past its expiration date. Think of “Love” as a time travel movie, but about really sad young people you probably wouldn’t want to hang out with in real life.

In “Love,” Murphy essentially relives a past life. He is not however in control of his emotions, so his memories are fragmented, and out of order. He recalls Electra because her mother calls him, giving him a sentimental oasis to cling to in order to escape his life with Omi. Still, in flashbacks, we see how Murphy’s relationship with Omi ironically started because of Electra, and how Electra and Murphy’s relationship was always a co-

dependent one. He, a film student with posters of “Saló,” and “Story of O” hanging ostentatiously on his bedroom wall, jealously obsesses over her. But eventually she, an aspiring painter, reveals that she’s just as concerned with being protected. They form an unhealthy relationship that expresses itself through violent outbursts, and copious sex scenes that range from genuinely sexy to mechanically frantic. So while Electra accuses Murphy of being a bright young man who doesn’t know what love is, she’s just as impulsive.

‏Since Noé (“Enter the Void,”Irreversible”) wants to steep viewers in Murphy’s confused emotions, the experience of watching “Love” can sometimes be more frustrating than thinking about the meaning of “Love” while you watch the film. In fact, “Love”  probably only works if you see it as a paradoxically over-determined work of and about sensuality. Noé uses 3-D photography but also never stops reminding viewers that they are outside of the frame, as he directly acknowledges in one scene where an erect penis thrusts directly at the camera before ejaculating CGI semen. You can’t watch this movie and ever really forget that you’re watching a movie, as is reinforced by the film’s elliptically-structured plot, droning soundtrack and periodic mid-scene black-out cuts. That’s because Murphy is, like some of Noé’s previous blank slate heroes, a character who remembers himself at his most frustratingly vacant.

Murphy thinks he knows it all, but is unfailingly clueless, as we see when he first meets Electra, and blurts out “What’s the meaning of life?” and she quickly respon ds in kind: “Love.” Noé’s movie is about characters who want to stay nestled in the past, as is evidenced by his frequent use of reddish-brown camera filters, and symmetrical frames-within-camera-frames compositions. “Love” is about an angry, sulking character who think he wants to make a “sentimental” romance featuring sex, but is ultimately incapable (and essentially uninterested) of seeing outside of himself. 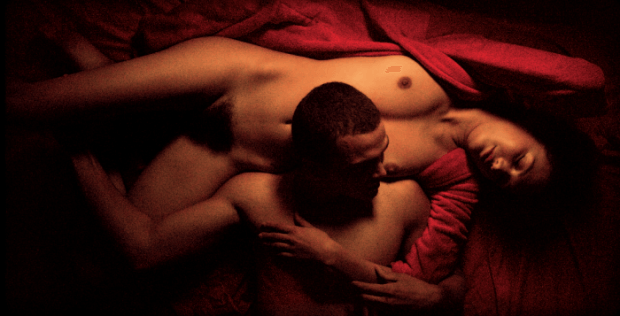 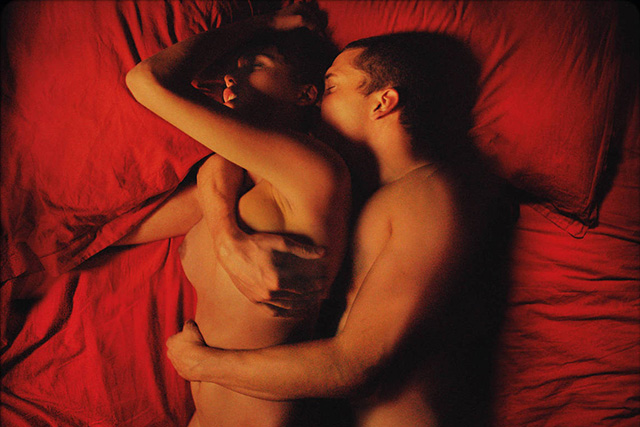 But what’s it like to actually watch “Love”? This is a movie where non-professional actors and unsimulated sex scenes constantly encourage viewers to form a bond of alienation, instead of a bond of sympathy, with Murphy. That may sound pretentious, but Noé knows exactly the type of effect he wants to achieve, and he mostly gets it. His biggest gamble is the use of first-time actors to elicit complex emotions. But he builds a complex relationship between Murphy and his viewers throughout the movie, one that speaks louder than the unmoving, shrill line-readings from all three of the film’s principle characters.

The film’s sex scenes are similarly mannered, mournful and distractingly graphic. But they’re not just endurance tests, or frustrating slogs either. Noé wants you to see sex as a cocoon, so he genuinely tries to show you what attracts his young characters to each other. His earnest objectification of actors’ bodies is, in that sense, often compelling. We look at bodies in motion, and see them as body parts first, and then people trying to get lost in each other, to give each other pleasure, and to remain lost in sensations that will always remain mysterious to anyone who isn’t experiencing them first-hand. “Love” may not always be enjoyable, but it leaves an abiding mark.

Review by Simon Abrams from rogerebert.com